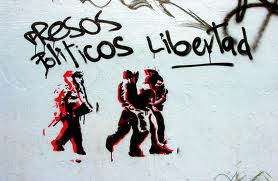 It has been 8 years since the federal government of the Mexican state Jalisco brutally detained and tortured many protesters who mobilized against the summit of the heads of state from Latin America countries, the Caribbean and European Union.

At this moment, some of arrestees are still facing criminal proceedings. The public prosecutor has decided that neither the imposed sentences are finished, or that the legal time limit for persecution has lapsed. And he is looking for harsher punishment of the comrades so to crush any other attempt of protest in the region.

In 2006 the organized anarchist movement in Guadalajara was fiercely hit. 45 comrades were imprisoned and tortured. The judgement was disastrously rigged and most of them were found guilty of various offences. Now after 8 years 12 comrades remain imprisoned without the right to bail. And for those that were released, exorbitant bail amounts are demanded.

In support of the prisoners we invite you all to vegan solidarity dinners.

Support political prisoners! No one can be completely free as long as one single person is still imprisoned!