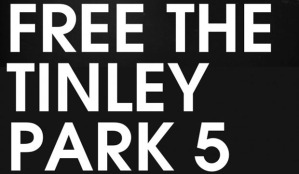 In May 2012, the Tinley Park Five were arrested in regards to an altercation between white supremacists and antifascists in the Chicago suburb of Tinley Park that left ten injured fascists, three of which needed hospitalization. Two white supremacists were also arrested, one for possession of child pornography and another for possessing a firearm as a felon. Despite this and the fact that the meeting was organized by violent white supremacist organizations including the National Socialist Movement, Council of Conservative Citizens, and Ku Klux Klan, the State showed their cozy relationship with white supremacy by refusing the accused antifascist activist bail or a plea deal comparable to any other criminal defendant in Cook County.

In January 2013 the Tinley Park Five accepted a non-cooperating plea deal. Currently the five antifascists are serving sentences ranging from three to six years in the Illinois Department of Corrections.

The writing evening will be at 19.30 in the Klinker (van Broeckhuysenstraat 46, Nijmegen).

After the writing evening there will be a show in De Onderbroek with Sleep kit and Negative Standards. We will sell some cake to generate some money for future actions for ABC Nijmegen plus will we be there with our stand with lots and lots of info on how to life in a society without prisons, info on prisoners etc.