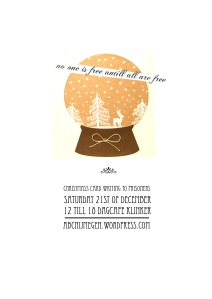 is hosting a writing afternoon from 12 till 18 in daycafe De Klinker..we will focus on Spyros Stratoulis that day but there will be lists ready for yall with as much addresses of prisoners we can prodvide.

So pass by and write someone a nice card while discussing how to overthrow this system with your friends…that would be a great christmas gift right?

In solidarity with the wave hunger strikes in Greek prisons, we are going to write to the person who is the inspiration and reason for this.

Spyros Stratoulis was incarcerated at the age of 17 and has spent the past 22 years in prison. From there he has faught the prison system with numerous hunger strikes, solidarity documents, abstentions from food, prison riots etc.

Additionaly to his sentence he was held on remand from 2008 until 2010, for being involved in prison rebellion which was triggered when another anarchist prisoner was beaten up by jailers.

Although no remand or restrictive order was issued against him in relation with another case that Thessaloniki police has built on alleged criminal organization not only that Spyros was deprived of regular exit permits that he fought so hard to get, but he is also bound to remain hostage pending charges, with a high probability of having to serve the maximum prison sentence length, which is 25 years in Greece, awaiting trial in this particular case, while he would have otherwise been able to request his release on probation in September this year.

On Monday, November 11th, 2013 Spyros went on hunger strike, demanding  the charges to be dropped and claiming his innocence in order to be granted days of leave again.

As an indicator of solidarity with the struggle of Spyros, many of his fellow prisoners launched a hunger strike, and more than 100 greek prisoners are rejecting prison food