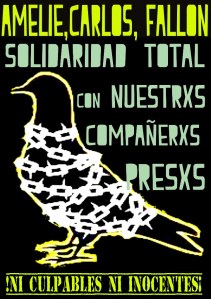 A few weeks have passed from he last time we updated the case of the anarchists detained on the 5th of January (5E). Here’s the update:

Once the Attorney General of the Republic couldn’t find sufficient evidence to keep the charges of terrorism and organized delinquency against the three, they were assigned to the Mexico City Attorney General and accused of property destruction and attacks on the public peace.

Their trial is now on the stage of presentation of evidence and their first hearing will be the second or third of April.

Amelie and Fallon were taken to the women’s prison of Santa Martha and Carlos to the Oriente prison.

We want to expand a bit on Carlos’ situation, explaining a bit more about the conditions that are lived by thousands of prisoners in the jails of Mexico City.

On these centers of imprisonment exists a great network of corruption and complicity between the authorities and some prisoners, who reproduce the logic of the jail by assuming the role of jailers of the rest of the prisoner. This network of corruption and complicity, not only serves to strengthen the disciplinary role of prisons, but it is also a great business, as the majority of prisoners are forced to pay for everything: visits, roll call etc. in exchange they will not be beaten by those other prisoners who enjoy the protection of the authorities, and who receive in exchange part of that money. These prisoners maintain control of practically everything in the jail.

A few days ago, we heard that Carlos had a problem with a prisoner, and had a scuffle with him, which then led to the prison guards to beat both of them up and locking them up for 9 hours in solitary confinement. Once they were released from solitary confinement, Carlos was taken from the intake area for classification. There he was required to pay so that he could skip the cleaning task known as “fajina” Our comrade decided not to pay. The “fajina” consists of cleaning a determined area but under the frame of tough exercises. During the first day of the “fajina” Carlos was once again beaten up by the prisoners, who were trying to make him buckle so that he would end up paying.

Today we know that our comrade is sick, as a result of the humidity in solitary confinement and he has back pains due to the beatings. But he remains strong and firm in his convictions.

Amelie and Fallon have not gone through similar situations.

We call to express our solidarity with the 5e detainees. We will continue updating their situation.

Freedom for Carlos, Amelie and Fallon!

A greeting to our comrade Tripa, may you never stop!