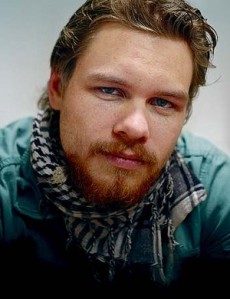 We add a clarification about the case of Jock Palfreeman. The imprisoned comrade has not taken responsibility for the armed wounding /death of the fascists that attacked him and the Roma he was with during the ‘index offence’ for which he is imprisoned. We issue this transmission to clear any possible errors contained in the transmission of the following article, and to take our share of responsibility for this error:

http://325.nostate.net/?p=10800
*Jock in self-defense seriously injured two of his attackers, one fatally.*

http://interarma.info/en/2014/07/11/boulgaria-enhmervsh-gia-jock-palfreeman
*During the fight Jock injured one of the fascists and killed another one.*

According to his own statements, Jock Palfreeman took out a knife in self-defense against his aggressors, but he has never admitted stabbing anyone. … Some people who support him usually write descriptions like “Andrey Monov was stabbed and killed and Antoan Zahariev was injured,” or “two of his attackers were injured of whom one died later from his injuries” – not indicating who the stabber was…

From the ‘official’ story – see below…

J.Palfreeman’s Statement: …
«No one from the group was stabbed with my knife. When the police came,
I saw blood on the knife and said – ‘oh shit, where was I stabbed’.
Because when I was on the ground I saw that the knife was at about a
metre from me and some of the men came and tried to pick it up. The
people who were bodyguards were pushing and stopping them, preventing
them from taking the knife. While I was defending myself, I can’t
remember if the knife was the whole time with me, because I was
distracted. When I was on my stomach, the knife wasn’t on me and the
people were fighting around me and spitting at me, still trying to
attack me.»
_ _

J.Palfreeman’s Statement: …
«The conclusions of Sofia City Court are in contradiction to the
sequence of the events. The assertion of the prosecutions is that the
concrete blocks had been thrown after Monov’s death; however on the
footage one can see just the opposite. Leaving aside the impartiality of
Sofia City Court, in their conclusions they have rewritten the events in
a way they have not occurred.

The forensic medical report, which states that Andrey Monov has been
killed with a dagger, is completely ignored by SCC, obviously because it
does not agree with the conclusions of the same court. But why was the
contradictory evidence ruled out, when the facts should have been used
to form those conclusions.

Although SCC has room for interpretation, I believed that the report,
which states that the knife used for the killing of Andrey Monov is not
the same knife I’ve been holding, so I believed, that this report would
be important for the court, however it was rejected as it did not agree
with the conclusions.

The whole spirit of the report and the accusations, if anything is in
contradiction it just gets ignored and left aside, that is why the
conclusions of SCC are so short and inconsistent. There is not one
person who can read it and understand it, it has no sense at all. I gave
the court decision in Bulgarian to a friend of mine in the prison, I
asked him to translate it in English, and he said: “how could I tell you
in English something that doesn’t make sense for me in Bulgarian”.

The group tried to break my head with large concrete blocks – 30 sq. cm.
Everyone, who lives in Sofia, knows what I am talking about, about what
kind of cobble stones, and those cobble stones, which they threw at me,
are still there. All this happened before Andrey Monov’s death. Antoan
Zahariev and Andrey Monov not only took part in the conflict, but the
group itself gave evidence that Andrey Monov and a witness by the
nickname ‘the tall Toni’ have started the attack on the persons from
Roma origin.

I maintain my initial statements, all statements, without the need to
explain any contradictions in them. I support the initial plea of my
lawyer and all the submissions of my father as the arguments they are
talking about still have not been answered. We have not received an
answer from the prosecutor’s office to the arguments we’ve submitted. It
is not a matter of interpretation, when all the objective evidence is
pointing to one thing, and this thing is that I have acted in a defence
of another person, who has been attacked. I have never thought that
anyone will die, except the Roma people, who were attacked, or me. We
were the ones in danger, and we were the ones, who were attacked. This
is all I want to say.»
_ _

«My gratitude to my family, friends and comrades who have not supported me as an individual but supported me based on the evidence in my case and the reason for my involvement with the 15 skinheads. -Jock Palfreeman»
http://anarchistsolidarity.wordpress.com/2011/02/23/jocks-sentence-upheld-after-an-appeal