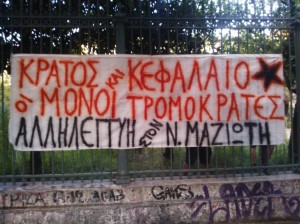 In the evening of July 16th, 2014 comrades put up a solidarity banner at the gate of the Polytechnic School, on Patission Street, in response to the fact that Revolutionary Struggle member Nikos Maziotis was recaptured by police in central Athens.

Anarchist Nikos Maziotis, who was on the run for two years, was seriously wounded and arrested earlier today after a shootout with cops in Monastiraki. He was then transferred to the tightly-guarded Evangelismos hospital, where he remains hospitalized. According to his lawyer, the comrade’s life is out of danger.

From 22:30, dozens of anarchists gathered outside the hospital to demonstrate their solidarity with urban guerrilla fighter Nikos Maziotis. At about 23:30 the solidarity intervention was over, and an assembly was called for tomorrow, Thursday 17/7, at 19:30, in the Polytechnic School in Exarchia.

More updates as they come.

– the banner reads: The State and the Capital are the only terrorists – Solidarity with N. Maziotis