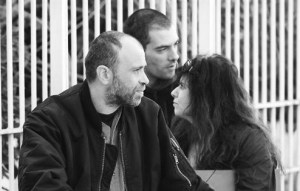 As you will know, on July 16 after a random check, Nikos Maziotis was arrested after a gunshot injury to his arm. From the very first moment, the bourgeois media attempted to present the comrade as a “social threat” and to devalue the political action of Revolutionary Struggle. In reality Nikos Maziotis defended his life and his freedom with gun in hand.

The media and the police tried to project a manufactured version of events where Nikos Maziotis was shooting indiscriminately endangering the lives of bystanders, which is far from reality. Immediately after, intense investigations and searches of comrades’ houses began and a manhunt was organized for Pola Roupa who escapes capture.

Nikos Maziotis’ health status is out of danger and around the middle of September he will know if further surgery on his arm is required. He is exhausted from the surgery and takes strong medication for the risk of infection.
After a brief hospitalization in Evangelismos hospital, he was transferred to the prison hospital in Korydallos (Athens) and then, purely vindictively, he was transferred to the Diavata prison in Thessaloniki, where there isn’t the necessary infrastructure to monitor his medical situation and communication is difficult.

Despite this, he still has very high morale and is in a good mood.
He does not recognize the police and judicial authorities and therefore did not apologize. All he said was that he is a revolutionary and that members of the Revolutionary Struggle do not apologize to the dogs of the state.
His presence and reasoning will be advocacy of armed revolutionary action and Revolutionary Struggle in particular. He will support that it was solely the continuation of the struggle that led him and Pola Roupa to flee and go underground.
Since the day of his arrest there have been several movements of solidarity, there has been counter-information in relation to the events and efforts continue.

Generally for August we will prioritize medical issues and attempt to bring him back to Korydallos.
In late August or early September, he will himself issue a political statement.
Note that for the next few months he will not be capable to write.

We will keep you informed of any developments.